“Ah, my dear, come, walk with us. Such a special day – we’re going to hear the bans read. Yes, little Marta. Young Ivan, from the mill? No, my dear, not him. Oh yes, she fancied herself in love, but as I said to her: no promises were exchanged.

A count. I know – who would have thought a count would stumble on our little establishment? As soon as he saw her, he wanted her. Love at first sight. He is a good deal older, and he’s a widower. Three wives, I think – but, my dear, so wealthy! See my fur? A gift – from my future son-in-law. So funny to call him that.

She refused him at first, but my husband put his foot down. Such an opportunity! Her own establishment, a carriage – with a coat of arms. Servants. He’ll take her back to Moscow with him, it’s all arranged. No, she’d be a fool to turn down this opportunity.

Marta’s not with us today, no. I know it’s customary, but she’s ill, poor child. It’s the excitement, I think. She’s been in bed for 3 days now. Not eaten a thing. Still, the dressmaker arrives from Moscow tomorrow. I’m sure she’ll feel better then.”

Another tantalising image from Jane Dougherty. Do we like this couple? No, it seems, we don’t. They are “Going to Church” and they were painted by Antos Frolka (I think. It was hard to know where his name stopped and where the title began…) 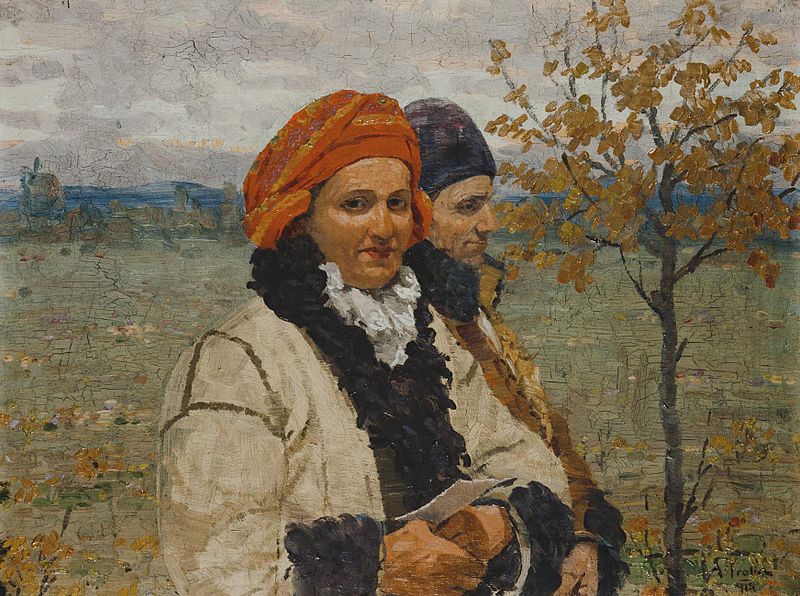 6 thoughts on “Going to Church – microfiction for Jane Dougherty”