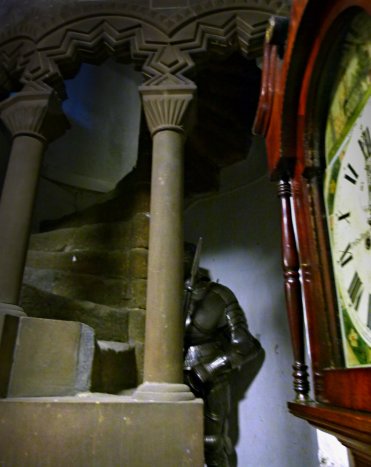 “It’s a fairytale castle!” Miss Priscilla said, clapping her hands, as they pulled up outside Mandeville Castle. Her father laughed, and patted her cheek. Her mother said nothing. Prue, sitting up by the coachman, sighed inwardly. Miss Priscilla was 15, for goodness’ sake.

After that it was castles this and princesses that, and with nobody else to entertain her Miss Priscilla assumed that Prue would always be available to make “Just a few tiny fairy cakes for a royal tea party”, or to “just stitch some more lace onto this dress, and then it will be the perfect ball gown”.

Mrs Bennison looked up from her novel from time to time, and said “I’m sure Prudence has enough to do, Prissy. Prudence, do tell her if you’re too busy”.

And Prue nodded and bobbed, but kept quiet. She rather thought that it would not be a good idea to say “no” to Miss Priscilla. Not if she wanted to keep her job. Mrs Bennison would smile vaguely and go back to her novel until it was time to ring for tea.

By the end of the third day, Mr Bennison was referring to Princess Priscilla, and Miss Priscilla herself had explored half the castle, worn all three of her party dresses, and eaten enough cake to satisfy a whole tenement of children. That was when she discovered the library. There was a charming little step ladder on wheels that Prue could push around, and then hold steady while Miss Priscilla clambered up and pulled out dusty book after dusty book. Most of them were dull – hardly any even had illustrations. It was nearly teatime when she reached for the thick black-bound book on the seventh shelf up, and pulled it towards her. Prue heard the gasp.

And she jumped down the last couple of rungs, and showed Prue her find.

After tea, Miss Priscilla went back to the library, and stayed there until dinner time. At bedtime she chattered happily to Prue, who was brushing her hair and folding her clothes, and not really paying much attention, until:

“So that’s my plan, Prudie, dearest. I’ll be the princess, and you can be the wicked fairy. I’ve written the spell out for you, so you can mix it up properly. “Sweetest singer”, it’s called – isn’t that charming? Tomorrow afternoon, about 2 o’clock, you can come and find me in the highest tower, and you can cast your spell on me!”

Prue sighed as she read the spell. It was all stuff she could find in the kitchen, she reckoned, though her reading wasn’t the best. There were a couple of words she was guessing at, but there! It was only a game, after all.

She sighed again, at the foot of the winding staircase up to the highest tower. It would have to be the highest tower for Miss Priscilla, but she hadn’t been on her feet all day, and Prue had already had words from Cook about doing what she should be doing, not making messes for Miss Priscilla. Still, the clock was striking two, and she set off, clambering up the stairs with a tray bearing one brown glazed jug full of magic potion, one glass of fresh lemondae, an empty sherry glass, and a plate of fairy cakes with pink icing.

Miss Priscilla was so excited to see her, and delighted with the magic potion.

“It smells perfectly horrid!” she exclaimed. “We’ll drink it first, and then we can have the cakes to take the taste away!”

“Of course you could,” she urged. “Just think, you could become a famous opera singer! How wonderful would that be?”

And so, giggling, they shared the sherry glass between them.

When Mrs Bennison rang the bell for tea at 4 o’clock, nobody appeared. When she rang again, and then again, Cook presented herself, complaining that “that Prudence” was off playing games, and leaving all her work behind her. It wasn’t Cook’s place to serve tea. She was not happy at all. Miss Priscilla didn’t appear at the tea table, either, but Mrs Mandeville vaguely supposed she must be busy somewhere. It was Mr Bennison who became alarmed when Miss Priscilla wasn’t at dinner, and it was Mr Bennison who roused the household to search for her, and for Prudence, who also seemed to have disappeared – as Cook kept complaining.

It was James, the second footman, who climbed the highest tower, but there was nobody there. The girls had obviously been there, he reckoned, judging by the broken glass on the floor, and the tray of cakes and lemonade on the little round table by the window. He was a kind hearted lad, and he carefully opened the window and let out the two greenfinches he found pecking at the fairy cakes, and then went down the long spiral staircase to join the search of the cellars.

This is for Sue Vincent’s Thursday photo prompt.

8 thoughts on “#writephoto The enchanted castle – for Thursday photo prompt.”